SFNR is a 501(c)(3) non-profit organization. While our services are free, we depend on donations to continue assisting families in need. Your donations are appreciated! 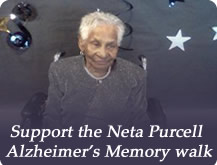 April 29,2013 I was fortunate enough to take my 93 year old mother out of a Reisterstown Nursing Home.  After caring for mom at home for a long time we felt that during her walks to the bathroom at nights she seemed to have been loosing her way throughout the house. The family sat down and discussed the idea of placing her in a nursing facility. We choose Future Care Cherrywood. It was close to home, the facility looked beautiful and the initial interview went well. Approximately two weeks later the family went for a tour before placing mom. I asked about the residents sitting around the nursing station, not knowing mom would become one of them, the answer seemed satisfactory at the time. I visited mom every day sometimes two times per day. I exercised her daily through walks and other stretches. Upon seeing meals left in front of residents and picked up later I felt the need to feed mom myself, so I participated during meal time.

Within a six month period mom fell 8 times. Each time I was told by the administrator that they could not stop mom from falling. She fell from the wheelchair while sitting in front of the nurses’ station, in the activity room, and out of the bed too many to mention, Mom was not getting her showers on her scheduled shower days, so I began showing her myself. I noticed the faucet was placed in the wrong position. When I approached the administrator I was told that it was not her responsibility it was that of maintenance. (She did not have a clue for 3 months, I had to walk her to the shower room) she had it fixed the next day... Mom was on a schedule to be toileted which was not followed causing her to fall at nights mainly because she had the need to go to the bathroom and there was no one to help her. I was never present for any of my mother’s falls. It was always  after I left or before i fot there .Mon was finally left on the toilet by a staff member causing yet another fall, this time receiving 4 stitches in the head. I contacted OHCQ (Office of Health Care Quality) and after looking over my mother’s records Future care Cherrywood was cited for her falls. One week later Mom was placed on Tramadol a pain medication which kept her drowsy while sitting in her chair, when I inquired as to why my mother was constantly sleeping in her chair one of the nurses informed me that she was placed on that medication for pain. Mom took no medication for pain prior to entering the facility We discussed the fact that she does not have pains and if she should complain of shoulder pain she is to have Tylenol PM only “ Well, mom got Tylenol until they were cited “. Upon speaking to the doctor who ordered the medication  why was i not informed. He became defensive and unprofessional when I questioned his attitude I was told by him that he was threatened by my questions. Shortly thereafter I received a letter from him informing me that he will no longer be able to be my mother’s physician.

I then choose another doctor I thought was wonderful. Things went well until I found mom so wet that I had to actually take the evidence to the administrator. At which time I was asked “What can we do to make you happy. (No apologies,) I could feel the anger towards me. I was becoming a problem, I explained the reason for the evidence and made it known that I was planning to call 911 to report neglect. They begged me not to, they then called 311 making a false accusation of me being disruptive and causing a disturbance. They went even further to state that some of their residents had to be sedated.  The result was a letter from their lawyer restricting me from visiting my mother unsupervised. I was finally able to bring mom home where she  received great care and and participated in ederyday activities until her peaceful death three yeas later.

An Article About Nursing Home Abuse

Another example of nursing home abuse in Oklahoma.  This must be stopped.

What is a living will?

A legal document that informs your health care providers and family about your wishes regarding medical treatments in the event that you are not able to speak for yourself or a physician has determined that you are unable to understand your diagnosis and therapeutic options.

It also allows you to include a description of your beliefs, values, and general care and treatment preferences in the event that your living will does not specifically cover a particular situation. A living will can also be referred to as an advance directive or health care directive.